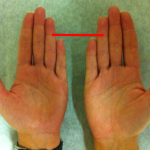 Should you test for gluten sensitivity? Probably not. Why? It doesn’t matter if you are sensitive to it or not. Gluten has been associated with numerous other medical problems including things like Multiple Sclerosis, Schizophrenia, Parkinson’s Disease, and Alzheimer’s Disease to name a few. Many of these conditions don’t show up for decades. Therefore, I believe it is prudent to reduce gluten exposure in order to reduce the risk of these illnesses.

How can something that The Bible refers to as The Staff of Life be the source of so much modern illness? Didn’t God nourish the Israelites with the bread (manna) from Heaven? Well, according to gluten expert Dr. Thomas O’Bryan, seven out of ten people are sensitive to gluten, the toxic protein found in most grains! Were the Israelites somehow exempt from gluten’s wrath? Or was the all-knowing God just a little behind on his research?

The truth is that we are not eating the same grains that Moses may have snacked as he hiked Mount Sinai. In fact, we’re not even eating the same grains our grandparents ate! In just a mere 50 years, grains – wheat, in particular – have become a mutant species crafted by the hands of human intervention in the name of increased crop yields, resistance to drought, disease, and heat, as well as an end to world hunger – all of which are honorable causes and tremendous scientific achievements. However, the accelerated evolution of wheat through hybridization has been to the detriment of human health.

Some people are more sensitive to gluten than others. Symptoms manifest differently in different people. So, how do you know if you are gluten sensitive?

Braly’s Sign was first described in 1953 by an English Gastroenterologist, Dr James Braly. The majority of Celiac patients have a short 5th finger and this is Braly’s Sign. (J Pediatric Gastroenterology and Nutrition 2000; volume 31 (Suppl.3):S29. NEJM, August 18, 1999).

In short (pardon the pun), the tip of the 5th finger (pinkie finger) is shorter than the crease of the last joint of the 4th finger (ring finger).

Of course, the best option for checking for gluten intolerance is to simply cut it out completely for 30 days and see how you look, feel, and perform.