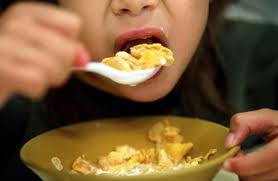 This is the perfect time of year, when the kids are returning to school, to consider some healthy breakfast options. Boxed cereal? Should it be an option? It most certainly is convenient but…nourishing? Well…I’ll let you decide…

In 1960, researchers at Ann Arbor University performed an interesting experiment on laboratory rats. Eighteen rats were divided into three groups. One group received cornflakes and water; a second group was given the cardboard box that the cornflakes came in and water; and the control group received rat chow and water.

The rats in the control group remained in good health throughout the experiment. The rats receiving the box became lethargic and eventually died of malnutrition. But the rats receiving cornflakes and water died before the rats who were given the box—the last cornflake rat died on the day the first box rat died. Before death the cornflake rats developed schizophrenic behavior, threw fits, bit each other and finally went into convulsions. Autopsy revealed dysfunction of the pancreas, liver and kidneys and degeneration of the nerves in the spine—all signs of “insulin shock.”

The startling conclusion of this study is that there is more nourishment in the box that cold breakfast cereals come in than in the cereals themselves. Loren Zanier, designer of the experiment, actually proposed the protocol as a joke, but the results are far from funny. They were never published and similar studies have not been repeated. If consumers knew the truth about breakfast cereals,vast fortunes would be jeopardized.

There are three additional topics to be considered when it comes to cereal consumption:

#1  Many, if not most, cereals are using genetically modified (GMO’s) corn in their preparation. Learn more here:

#2 Modern cold breakfast cereals are made by a process called extrusion. The grains are mixed or mashed with water to make a slurry and then forced out a tine hole under very high temperatures and pressures. The shape of the die on the hole determines whether the final product will be a flake, a little O, a puffed grain or a shredded grain (for shredded wheat or triscuits). Extrusion represents extreme cruelty to our grains.

The industry has convinced the FDA that high-temperature, high-pressure extruded grains are no different from non-extruded grains and has contrived to ensure that no studies have been published on the effects of extruded foods on either humans or animals.  However, two unpublished animal studies indicate that extruded grains are toxic, particularly to the nervous system. Learn more here:
http://www.westonaprice.org/food-features/be-kind-to-your-grains

#3 What type of milk are you adding to your cereal? Children need lots of healthy fats for optimal health. Dr. Weston A. Price recommended one quart of whole milk per day for children, to ensure adequate minerals and fat-soluble activators. (This was back in the day when it was easier to obtain nutrient dense raw milk but WHOLE pasteurized, homogenized milk would be better than 2%, 1% or skim milk that is available now.) Learn more here:
http://www.westonaprice.org/making-it-practical/milk-it-does-a-body-good?

So…how do you give your children a healthy breakfast? EGGS! Sunny side up, hard-boiled, over easy, quiche, scrambled…however you prefer…and then rest assured that your child has a great start to their day!  🙂